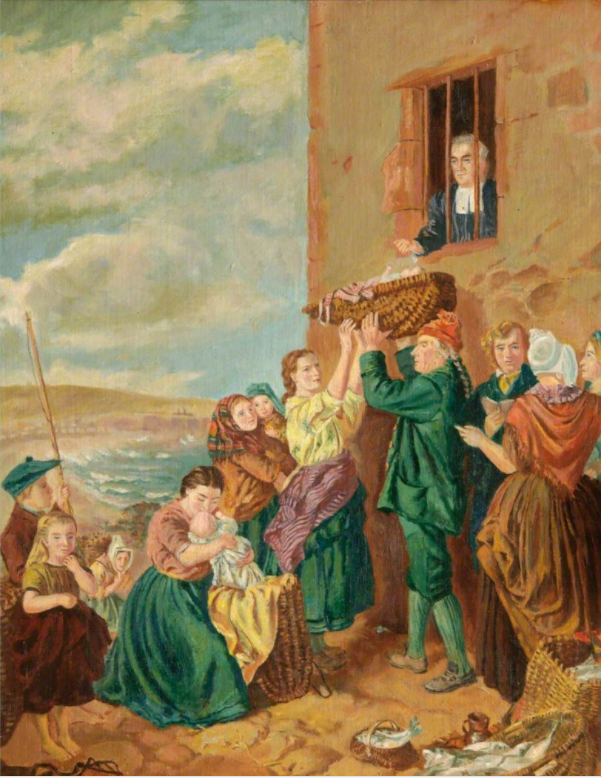 The Artist’s models are believed to be the following:

Holding the basket containing the child for the Baptism – Robert Masson, son of James & Janet Masson, born in Sketraw and baptised on the 14th July 1794 (they have been members of William Walker’s congregation). Robert was confirmed on 19th August 1816. He married Jean Masson on 30th October 1824 and after her death he married Isobel Masson on 20th November 1836. Robert died at 15 Sketraw on the 4th November 1874 and was buried in Cowie Churchyard.

The woman holding the basket was Isobel, Robert’s daughter to his second wife who was born at Sketraw on the 10th November 1842 and baptised on the 13th November. She was confirmed on the 8th June 1856 and died of consumption on the 24th February 1865 at 15 Sketraw and was also buried in Cowie Churchyard.

Behind Masson stood Andrew Christie holding the book, son of Andrew Christie and Mary McLeod who was born in Stranathro on the 23rd June 1832 and was baptised on 1st July. He was confirmed on the third Sunday after Easter in 1844 and was married to Janet Masson on 2nd November 1861. He was lost at sea during the storm of 21st April 1880 along with three of his brothers and his son Andrew.

The woman in the ‘mutch’ and red shawl was Robert Masson’s second wife Isobel who was born in Cowie about 1811 and died on the 20th March 1893 and was buried in Cowie Kirkyard.

The little girl on the corner was Jane Christie known after the manner of the times as Jane ‘Jo’ and further described as ‘Souter Wullie’s wife’s sister’. The boy with the broad bonnet was William Masson, father of William Masson who was at one time a Cabinet maker in Beachgate, Stonehaven and latterly resided in Aberdeen. The woman next to Mrs. Robert Masson can be identified only as ‘Cowie Kirsty’ while the Minister in the picture was a Mr, Skinner, a clergyman on holiday from Essex.

The girl in the tartan shawl is Ann Christie, daughter of Robert Christie and Janet Masson who was born in Sketraw on 15th June 1854 and baptised on 1st July. She was confirmed on the 25th May 1869 at Muchalls, She married William Lees from Sketraw on 13th April 1874 and later moved to Stonehaven with her family. She died at 1 Albert Lane Stonehaven on 26th February 1930 and was buried at Cowie. According to her, she and the more distant figure were merely intended by the Artist to be passing spectators of the scene and Mr, Brownlow afterwards gave her the shawl as a gift,

Some confusion arises over the identity of the woman bending over a newly baptised child. According to one source it was Isabella referenced above, whilst another holds that it was her sister Elizabeth Masson. Much of this information was given many years ago by another daughter of Robert and Mrs. Masson, namely Mrs, Alexander Christie, mother of the late Mr. James Christie, Castle Street, Stonehaven, and was corroborated by Mrs. Lees mentioned above.

The names of the relations of the various artist models and their dates of birth etc. were supplied by Bob Mathewson of St. Ternan’s Scottish Episcopal Church, Muchalls,

For further information, or if you wish to purchase a copy of the painting contact George Masson of St. Ternan’s on 01569 759283